Elena and the Secret of Avalor is an upcoming illustrated storybook based on the upcoming special of the same name. It was released on October 18th, 2016.

In this beautifully illustrated Secret Library story, Sofia discovers the incredible mystery behind her amulet. Princess Elena from the Kingdom of Avalor has been magically trapped inside Sofia's amulet, waiting for another Princess to set her free, and Sofia is up to the task! Join Sofia in a magical adventure and meet Disney's newest Princess, Elena of Avalor. 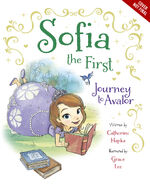 Early cover
Add a photo to this gallery
Retrieved from "https://jack-millers-webpage-of-disney.fandom.com/wiki/Elena_and_the_Secret_of_Avalor_(book)?oldid=7908"
Community content is available under CC-BY-SA unless otherwise noted.