Amanda Leigh "Mandy" Moore (born April 10, 1984) is an American singer-songwriter, actress, model, and fashion designer who is best known for her starring role as Rapunzel in the 2010 hit Disney animated film, Tangled and reprised the role in most of the character's subsequent appearances. She also voiced Nita in the 2006 direct-to-video Disney film, Brother Bear 2, Mara in the Disney XD animated series, Tron: Uprising, Sheriff Callie in the Disney Junior series Sheriff Callie's Wild West, and played Lana Thomas, the high school rival to Anne Hathaway's Mia Thermopolis, in the 2001 hit Disney comedy film The Princess Diaries.

In 2010, she was chosen for her largest theatrical role to-date, providing the voice of Rapunzel in the hit Disney animated film, Tangled. Moore was critically acclaimed for her performance.

Some audiences have noted certain similarities between Moore, and her character Rapunzel, such as their facial features and personality. Also, Moore is famous for frequently changing her hairstyle and color from short and brown, to long and blonde, or vice versa, similar to Rapunzel. Furthermore, Rapunzel is seen barefoot throughout the majority of the film. Likewise, it is a known fact that Mandy Moore as a singer, enjoys performing barefoot. She also played Mary Portman in 4 episodes of Grey's Anatomy.

In 2002, Mandy Moore voiced one of the Final Fantasy characters, Aerith in Kingdom Hearts.

In 2014, Mandy Moore reprised the voice of Rapunzel in the Disney Junior special, Sofia the First: The Curse of Princess Ivy and in the special, she sings the song "Dare to Risk it All". 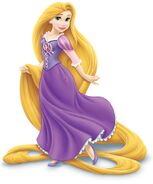 Rapunzel (Tangled and Sofia the First: The Curse of Princess Ivy)

Aerith (Kingdom Hearts (game))
Add a photo to this gallery
Retrieved from "https://jack-millers-webpage-of-disney.fandom.com/wiki/Mandy_Moore?oldid=7585"
Community content is available under CC-BY-SA unless otherwise noted.